HOW DOES THE EMF HEALTH CARD WORK?

The volume of the body consists of approx. 90% water and is approx. 75% by weight. This body water is naturally structured hexagonal. This means that the water molecules in the body (in a healthy state) mainly occur in hexagonal structured shapes. In a natural situation, this structured body water provides a protective vest against radiation. Natural harmonic radiation from the sun, cosmos and earth supports and strengthens this protective function.

In the last 20 years, the body has experienced a huge increase in unnatural radiation from WiFi and mobile networks (3G, 4G and 5G radiation), transmission towers, high-voltage towers and smart meters. This Electrosmog is non-harmonic and disrupts the structured body water, our natural protection against radiation. As a result, our natural defence system no longer functions and we become unbalanced.

The patented HQR technology in the EMF Health Card creates a harmonic electromagnetic field. This field is specifically tailored to the structure of the water in each organism. This allows the water structure to recover and any effects of the unnatural and non-harmonic radiation to be undone. The main purpose of the harmonic field is to bring the natural defense system back to its original state, so that you are better protected against electrosmog.

The EMF Health Card is made of 100% natural materials without electronics. The card uses the patented HQR technology (Harmonic Quantum Resonator) and creates a strong natural protection against electrosmog around you, anytime and anywhere.

This patented HQR technology in the EMF Health Card is comparable to the effect of tuning forks, which are then amplified many times over. The metal internal structure of the card is made to vibrate by the EMF frequencies of the electronic devices. The strong harmonic electromagnetic field generated in this way resonates with the natural structure of the body water and thereby brings it back into its natural structure.

The more electronic radiation from devices hits the card, the stronger the harmonic field of the card becomes. 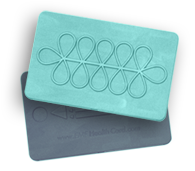 Highly sensitive people immediately experience negative effects of electrosmog. They experience many symptoms such as stress, headache, gastrointestinal complaints, a bad night’s sleep, lack of energy and are (more) quickly irritated. As a result, this group of people is more often aware of the adverse effects of unnatural radiation.

However, most people are not aware of the possible negative effects of electrosmog. The amount and strength of this unnatural radiation has slowly but surely increased during our lifetime. It sneaks in, as it were. By asking people whether electrosmog has an effect on them, they start thinking about what symptoms they experience and whether radiation plays a role in this.

After using the EMF Health Card, 9 out of 10 people experience a change. Vague symptoms subside and they feel better overall. Only then do they realize that they apparently suffered from the electrosmog. The EMF Health Card is also a tool to indirectly determine whether electrosmog has an effect on you.

In fact, the positive effects of the card are the opposite of the negative effects of electrosmog. There are users who immediately experience a difference when they hold the card, while other users only feel the difference after 2-3 weeks. This is why we use a 30-day money-back guarantee.

THE EFFECT OF ELECTROSMOG ON THE BODY

The images below show an example of the disturbing effects of electrosmog. In the image that shows the non-harmonic effect, the water structures or your natural protection against radiation are broken. In the image that shows the harmonic effect, the water structures have been restored and thus your natural protection against electrosmog has been restored.

The HQR (Harmonic Quantum Resonator) technology in the card creates a very powerful harmonic electromagnetic field that is stronger than the electrosmog. This harmonic field also has the ability to reverse the effects of electrosmog by restoring the water structure in the body.

RESEARCH RESULTS OF RADIATION ON THE BODY

RESEARCH RESULTS OF ELECTROSMOG ON THE PLANTS

To make the influence of unnatural radiation visible to the naked eye, an experiment has been carried out with germinating plants. The aim of this experiment was to investigate the influence of electrosmog on the development of the plants. Two installations were used, both installations were exposed to the radiation of a digital cordless (DECT) telephone. The conditions were the same in both setups, except that in one setup the EMF Health Card was placed next to the phone

In addition to the fact that more seeds have germinated in the setup with the EMF Health Card, the seedlings also look greener and healthier. This shows that, despite the equal environmental conditions, the negative radiation from the DECT phone has an adverse effect on plant development and growth. An effect that is neutralized by the HQR technology in the EMF Health Card.

RESEARCH INTO ENERGY FIELDS AROUND THE BODY

One of the characteristics of a healthy and strong energy field around a living organism is that it is fully comprehensive and evenly distributed. However, this is not the case with the first two people (left and center) in the picture. Both energy fields are weakened and non-harmonious; there are holes in the field and the field has an irregular and disordered distribution. The third (Right) person shows the energy field when using the EMF Health Card with HQR technology. This energy field is strong, comprehensive and evenly distributed. In short: harmonious.

The photos were taken with a GDV camera.

HOW THE CARD WORKS

There are symbols on the outside of the card and these indicate which side has an energetic effect and which side has a calming effect. The side with the arrows carries a clockwise rotating energy which has a stimulating and energetic power when you point this side towards your body. The side with the loops carries an energy counterclockwise. This side has a calming and soothing effect on the body.

GIVE AN EXTRA BOOST WITH THE EMF HEALTH CARD

Several tests have shown that holding the metal strips on the sides of the card can improve the effectiveness of the EMF health card. The body itself generates a little bit of energy, (A body cell, for example, between 50 and 90 millivolts). This energy increases the effect of the HQR technology (Harmonic Quantum Resonator) in the card when the metal strips are touched. Hold the card between your fingers to a part of your body that appears to be out of balance. This gives the body an extra boost at this point.

EVEN MORE FACTS AND TIPS ABOUT THE CARD

A RANGE OF 3 METERS

The harmonic field that the EMF Health Card creates around you has a range of 3 meters on both sides of the card. The closer you are to the card, the stronger the card works.

The EMF Health Card is made exclusively from 100% natural materials. The outside is made from organically grown corn. The inner frame consists of the harmonic metal Bismuth in combination with other sources of natural metal.

USE ACCORDING TO YOUR WISHES

The card can be used according to your personal preference. You can decide whether you want to have it with you all day or just for several hours and which symbol, energizing or calming, you want to use. You feel what your body needs and what feels good.

When you put the card under or against a glass of water for a few minutes, the natural structures in the water recovers.

Unlike other anti-radiation products that only block the radiation from one device, the EMF Health Card creates strong natural protection against all radiation, anytime and anywhere.

ORIGINATING FROM THE NETHERLANDS

The EMF Health Card is developed and made in the Netherlands. Our team has combined medical, energetic and physical knowledge with the scientific approach of a pharmaceutical researcher.

The EMF Health Card adjusts its strength based on the energy of the unnatural radiation. The higher the electrosmog, the harder the card works to neutralize any effects of the electrosmog.

The EMF Health Card does not contain any electronics and is therefore maintenance-free. Provided that the card is not physically damaged, it can last a lifetime.

WHAT OTHERS SAY ABOUT EMF HEALTH CARD

My son often has a morning mood. After trying everything I put the card in his hands and then he became quiet. The children are generally more positive, I am also fitter at the end of the day. Using this wonderful “credit card” feels good. I feel stronger, happier and more stable.Yoni T.Maastricht

“I feel in balance again “

As a highly sensitive person (HSP), I experience that for example Wi-Fi and mobile phone radiation, unbalance me physically and mentally. In the first 3 weeks of using the card, I experienced changes but didn’t feel much better. After those 3 weeks I started to feel a lot better and that has continued, despite the radiation sources around me I feel that I am back in balance. I recently removed the other anti-radiation products, this card offers me sufficient protection.Jos A.Amsterdam

I was skeptical when I first heard about the EMF Health Card, but I knew that the big amount of wifi and mobile radiation around me was not good for me. Thanks to the money-back guarantee, I still bought a card. I measured my sleep before and during use with my smartwatch. While using the Card, my smartwatch recorded that I slept 30% more in deep sleep, according to many scientific articles this is the most important sleep. This made me feel fitter and able to function better and also concentrate during long days at the office.Peter K.Boedapest

“I started connecting with myself”

I want to let you know that the HQR in the Card is working great. Slowly I started to connect again with myself. I can control my thoughts and feelings a bit and see thoughts. Delicious. If I feel unwell or angry, I hold the card to my heart and then I calm down. Thank you very much for this beautiful gift.Rudolph F.Groningen